Jimmy Carter sued over book and what it means to you and me. 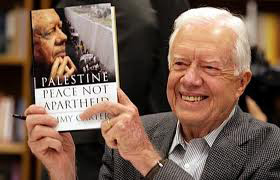 I was listening to a short weekly podcast that focuses on legal issues surrounding the publishing industry and how legal issues affect fictional character, plot and the like. The first topic for the day was this under-reported story about Jimmy Carter and his 2006 book, Palestine: Peace Not Apartheid (published through Simon and Schuster) being the subject of a 5 million dollar lawsuit.


I don't intend to get into the nuances of the lawsuit specifically, other than to say Jimmy Carter uses the term apartheid as a way of discussing the treatment of the Palestinians by the Israelis and indicates the Israelis may not be acting in good faith where peace negotiations are concerned.


After reading a number of articles on the subject, my impression is the lawsuit is an attempt to "work the referee." In this case referee = Simon and Schuster specifically and the publishing industry generally.


But if the Lawsuit is successful, it could have far reaching implications on any book that is published as non-fiction. For instance, would Sarah Palin and President Obama both be opened up for litigation by anyone who believes they are wrong and so have lied and misrepresented themselves? Could I sue Obama on the premise his brand of hope was not as audacious as advertised; Or perhaps too audacious?


I could go on and on with no real benefit. So feel free to insert your own Slippery-Slope style argument here.


People who are in a position to share firsthand experiences and their impression of that experience should be allowed to publicly state an opinion if it is based in fact. They don't have to be right. We don't have to agree with them. We are free to write a book that is contrary if we have enough expertise to know for certain the original premise was simply wrong. But it worries me to think we can sue them, because we find their opinion offensive.


That was an over simplification. The lawsuit alleges fraud based on the idea that Carter flat out lied. I will try to keep my eye on this and let you know if anything interesting happens.