The holidays are nearly upon us, as this cheese ball with Santa-themed cheese spreader proves. Last week I decided I must get all my literary agent submissions away before the end of the year. Arbitrary? Absolutely. But I went with it.

The fact is my manuscript is on the 5th draft. And though I could continue tinkering, I worry that many of the changes I could make at this point would do more harm than good. 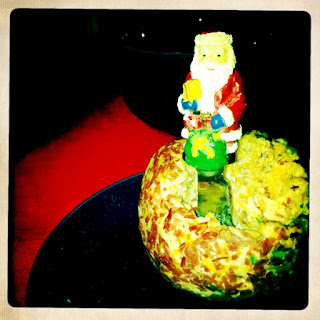 If I were to be honest with myself, and why not try something new, I would say I've been so frightened of the "agent search"part of the publishing process that I've avoided it for over a decade. Well, a week ago I ran out of excuses.

There are many resources, that are easy to find with a quick Internet search under Author Query, that will give free advice about writing a query to an agent. I read in this article about how to craft a query letter that one can expect it to take at least a dozen well crafted and well researched submissions to agents before one could expect to find an interested agent. That number seemed optimistic and a little antiquated to me. So I doubled it and set my goal at a list of twenty-four agents (pretty arbitrary, but it helps to set goals). I started my list by simply looking around my book shelves at books that resonated with me over the past few years, then researched the representation for specific books or authors. A monthly subscription to Publishers Marketplace made that fairly easy. Another good source for making an initial list of agents is a free site, AgentQuery.

One week ago today, having researched and formed my list, I submitted my first query to an agent I thought might have a strong interest in my manuscript. I read and re-read the query, I double and triple checked that I had all the material include in exactly the form it was requested. I hit send. I immediately realized that the agent's last name ended in two "Ns" and I only included one "N." I was devastated. I had ruined my best shot. I was so shaken I had to give-up on any more submission for the rest of the day.