Some news is simply good.

My literary agents, Pontas Literary and Film, celebrated their 25th year during a holiday in Barcelona: Sant Jordi. Sunday April 23rd was a sunny day and the city was filled with roses, as is the tradition. At times, having agents so far away is isolating and mildly torturous. But, I'm always proud of the shared association, the success of the founder in her realization of a mission to give under served populations an avenue for their valuable narrative perspectives, and being a very small part of a community of international writers.


The screenwriter who adapted my first novel, Good For Nothing, was in L.A. doing the legwork that screenwriters must do to put a project together. Michael Walker and his lovely wife, actress Genevieve Allenbury, flew to Chicago to dine with my wife and me. We shared a meal, drinks, and conversation for four hours. It was like meeting old friends for the first time. For me, writing is a solitary affair. It can be lonely. The deep sense of a real connection was hugely important. 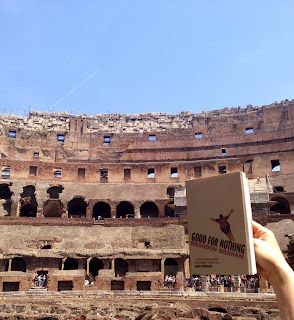 I've been busy writing my new book (I hope to finish the first draft by the end of June 2017) while also trying to promote the two titles that were published in January. By the end of July I will have participated in fifteen events. Including: A radio interview, a regional TV morning chat, a glossy lifestyle mag review, and numerous readings and signings. Two of the most rewarding were events at the Book Cellar, and recently a big to do at City Lit. I appreciate the community of writers, readers, and artists that keep coming out to be supportive. 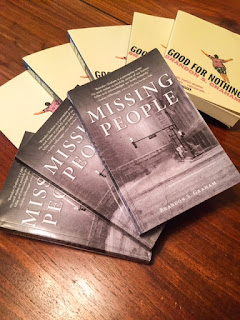 I was especially delighted to work with the artist, Joseph Lappie, (who produced the cover art for Good For Nothing) during the the City Lit event.

Lastly, my books are now settled under the Gallery Imprint of Simon and Schuster. Tyrus is no more. As a long-time visual artist there is a poetry to having my novels housed somewhere called Gallery. It is an established imprint and a respectable home for any writer. I have no complaints. 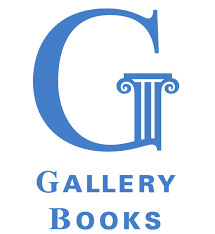