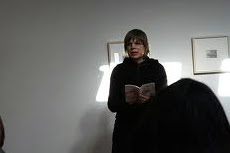 By Brandon Graham (published in the Journal of Artist Books in 2008 with better images and much nicer page design)
Sally Alatalo’s offset book series, known as DoDa, was a place to play with print, form and ideas. Alatalo prefers the title Artist/Publisher to that of Book Artist. She feels the success or failure of particular books in the series is an unimportant distinction. Her choice of offset is based on a fascination with how our society legitimizes printed material, and the advantage of its’ portability and affordability. Underpinning these statements is an assertion that DoDa was Alatalo’s first step on a path toward becoming a one-woman art publishing industry.
DoDa represented a publishing strategy for bypassing the “seemingly impenetrable and intimidating conventional art market.” It was a means of maintaining control of content and production values while empowering Alatalo to speak out when free speech seemed endangered. In this way individual DoDas-which when taken as a group could be characterized as playful, experimental, and approachable-could be viewed as mere byproducts of an ambitious publishing venture.

In 1983, one year before DoDa was initiated, Alatalo moved to Chicago and took a job at the Museum of Contemporary Art. She displayed work for the Dada and Surrealism exhibition curated by Dennis Nawrocki. In this role she was able to inspect Dada publications closely. The chaos of the design and content resonated with her own experience of mid-80’s Chicago; her friends were dying of AIDS, civil liberties were under attack from the Moral Majority which hoped to overturn Roe V. Wade, opposed state recognition of homosexuality, fought against the Equal Rights Amendment, and tried to enforce “traditional family values” by censoring media outlets. But it was more than the social commentary of Dada publications to which Alatalo responded. The experimentation with form and the juxtaposition of language and images were creative strategies that would soon be explored in her initial publishing endeavor.
The first DoDa was titled Chicago Dada (1984) and was, at the moment of its inception, a conversation with Man Ray’s New York Dada and other Dada publications. This piece consists of appropriated photographs and collage imagery as well as a small amount of rearranged and re-contextualized text; including a list of contributors: Slic Mic, Mama, The Marmalade Men, Smiley, Eiffel, Heart/Beat and Ren. Though Alatalo had an interest in collaboration and often invited guests to contribute (primarily for the center spreads), the names in this case, are pseudonyms for Alatalo herself. She admits this habit was an effort to feel more legitimate. But significantly, it’s the first incarnation of the pen names that she would become known for in her next major publishing endeavor, Sara Ranchouse Press. In the first years of DoDa the visual style was modeled on a combination of Dada publications and Make Ready detritus left behind at the School for the Art Institute of Chicago’s offset press by artists such as Philip Zimmermann and Conrad Gleber. But many other influences came to bear on DoDa as a publishing model.
In the early eighties Alatalo had worked in London as a job printer. She was exposed to 70’s anarchist/punk ‘zines and ephemera; she was made aware of small press publishers like Lapp Princess Press, Telfer Stokes’ and Helen Douglas’ WeProductions, Dick Higgins’ Something Else Press and Simon Cutts’ Coracle. The burgeoning mail-art scene, typified by the work of Ray Johnson and Eleanor Antin, also inspired her. Taking the artist-owned press model from Stokes, the Democratic Art philosophy from Higgins and art by subscription from Johnson, she began printing DoDa. Though it was available by subscription, it was also distributed through Printed Matter, Franklin Furnace and received early support from Clive Philpot at the Museum of Modern Art.
Over the arc of the DoDa project, individual books in the series were printed with the various titles Du Da, DoDa, Doo Da, Do Dah and Duz. For the first five years it was produced quarterly, then tri-quarterly, until Alatalo took advice from Buzz Spector and made Duz a numbered series. Early pieces were a record of Alatalo’s exploration of the book format. Initially, tentative text and nebulous imagery gave way to successful collisions of found text and images as in DoDa vol 4 no 1 and vol 4 no 4; both produced in 1988. 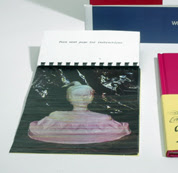 Alatalo’s experimentation with structure is evident in DoDa vol 2 no 4 in which staggered page lengths repeat the image of a colorfully mummified Barbie-Doll bust, and in vol 6 no 2 in which a cake-mix box is used to case-in original short fiction about a girl who bakes too much. Over time, the series had increasing political and social agency, repeated feminist themes and an evident interest in challenging assumptions and exploring meaning within shifting print technology. The series is marked by a tension between Alatalo’s whimsical exuberance, organic compositions, and generous collaborations on one hand and her goal of maintaining complete control as a publisher on the other. The last DoDa, DUZ#3, was published in 1995. This work was inspired by Charlotte Perkins-Gilman’s 1892 novel The Yellow Wallpaper and is the only DoDa that was not offset printed.
Two years earlier, in 1993, Alatalo launched Sara Ranchouse Press as a publishing project modeled on commercial paperback genre-fiction. Its goal was to print, promote and distribute books, with a particular interest in exploring the “economic life” of books. As part of this venture, Alatalo physically embodied the personae of pseudonymous authors in order to give readings. Though these performances were popular events, Alatalo kept the focus on publishing and distributing books; only one of her Sara Ranchouse books was produced as a prop for performance and even this book has a significant life as an object outside its performative context.
Alatalo’s continuing interest in perfecting a publishing process that allows her to produce her work as well as content from other artists has lead to a third publishing model. The Square series (Square Comics and Squares on Photography) provides an alternative to artists for whom the pulp paperback format isn’t viable.
Just as other artist/publishers influenced Alatalo, her work has influenced many others who have come of age in an era of war, economic recession and diminished civil liberties. These artists are have embraced what Alatalo’s entire body of work demonstrates; freedom of the press is limited to those who own one.
- March 31, 2011