This is an early version of a portion of the article that will appear in JAB 30: 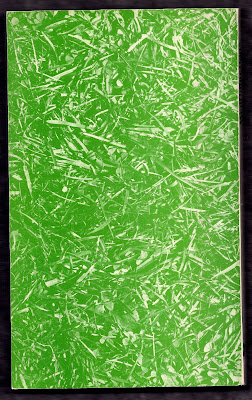 In the Summer 1975, Telfer Stokes’ and Helen Douglas’s moved from urban London and lived briefly in a farmhouse at Cairn Holy in Wigtonshire, in the west of Scotland. There, they began to plan a book. Chinese Whispers, approximately 18 x 11cm, offset printed, is a good example of their early work because of it’s playful and inventive page sequences and spread design, it’s text that explores the multiple meanings of language and layers of symbolism. For this book a corner cupboard of the farmhouse was constructed in the same proportions as the eventual dimensions of the open book. The book as a physically constructed object is a concept that runs throughout much of Weproductions’ catalog. The title, Chinese Whispers, references a word game, serves as a clue about how the book’s narrative is composed and is an apt metaphor for the collaborative process between Stokes and Douglas.
In the word game, a group of people form a circle. The first player whispers a phrase to the next. Although each player successively whispers what they believe he or she heard, as the phrase passes from person to person it inevitably is distorted and exaggerated. The last player announces the statement to the entire group. The accumulated errors from the retellings, differs significantly, and often amusingly, from the initial utterance. This game is known by several names: Telephone, Grapevine and Chinese whispers; it is not unlike a social version of the Exquisite Corpse technique played by Surrealist artist.
The concept aligns with this Weproductions project because of the way understanding of the visual content reveals itself on multiple levels and in surprising ways from one spread transition to the next. Like the game, the narrative in the book goes round in a spiraling loop, exploring objects through the lens of the camera and the dramatic use of vignettes in color. When it comes back, it has changed. 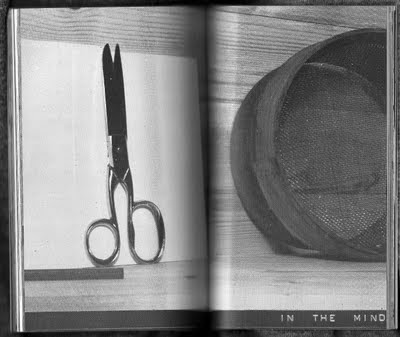 At the beginning of this sequence Helen’s camera captures the corner cupboard and it’s contents in black and white. The corner of the cabinet draws attention to the book’s gutter. To the left of the spread a timer and an adjustable film reel along with a corkscrew, to the right packets of Sutton’s Seeds for planting peas and cucumbers, plus two other packs that can’t be read. Along the bottom of the page, the self is labeled with partial phrase: Turn Over A New. As one turns to the next spread, the camera zooms, cinematically, and the shelf’s label can be read clearly: Turn Over A New Leaf. Again, one turns to the next spread and is surprised. To the left of the gutter the pattern continues with a shift in perspective that reveals the previously unreadable seed packet, to the right the same seed packet in a monochrome splash of green sitting against a white page, no longer in the cabinet, but instead cabbage seeds planted squarely in the book itself. In the next spread a vibrant green cabbage leaf springs from the gutter as if it were soil parted by a plow. And finally one turns the cabbage leaf as one turns the page, to reveal a new cabbage leaf, bookending the sequence with a kind of whimsical internal logic.
Like the give and take of a word game, this book was scripted, planned page by page and section by section. Stokes would suggest a starting point and a concept, Douglas would interpret the idea slightly differently, add to it and relay it back to Stokes. Stokes would run with the evolved idea and it would start again. In this way the book evolved as an honest representation of the collaborative process that yielded it. The photography began once they had the whole object planned.
It would be difficult to separate this book object from an exploration of rural Scotland. For the cover image, Douglas and Stokes used a spade to cut a rectangle of sod to the exact dimensions of the finished book and took a photo. Viewing the cover is like looking down at the yard of the farmhouse, as if one were stepping across the lawn before paying the duo a neighborly visit. The back cover is the same piece of sod photographed, root side up. 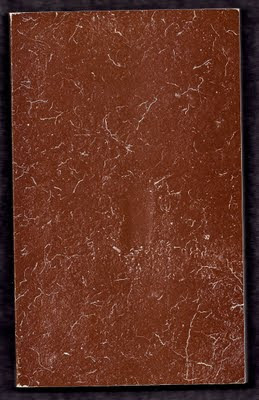