Ooga Booga sells Artist's Books and Zines, among other things

A few notes about other projects.
1) My friends at the Pontas Literary and Film Agency are shopping my novel, Good For Nothing. Its been around six weeks since they began sending the manuscript to editors. Some have suggested I must be prepared for the process to run it's course. On average this could take three to six months. Personally speaking, it feels emotionally similar to waiting to hear from agents when I embarked on that earlier step in this long journey. (Books take a long time.) Though, it is slightly less stressful because I have a community of people who are working on my behalf.

2) Artist and designer Karol Shewmaker and I are curating an event that will culminate in the publicatoin and distributoin of an artist book. The deadline for submission is a couple of months away. If you think you might be interested, check it out here: ROOM, behind closed doors.

3) I'm moving ahead with a new novel, the working title is Missing People. The writing is slow but productive.

A version of this conversation was originally printed in JAB28 (the Journal of Artists' Books).

One of the most rewarding by-products of writing and making art is the close and supportive communities that build around the activity of creating and distributing work. See what Wendy Yao had to say about the Ooga Booga community. When Wendy Yao was 17 she was best known as the drummer in the all-girl indie punk trio Emily's Sassy Lime. In the fifteen or so years since, she graduated from Stanford, can be found DJing at Mountain Bar, hanging out at China Art Objects (a gallery her older sister, clothing designer and former band mate Amy, helped found), or behind the counter at Ooga Booga, where she is owner/operator.

BG - How many titles do you carry and how many book artist’s do you represent?
WY - We represent a variety of artists, writers, musicians, designers, etc. Some are working independently and some are related to the creative community I’m involved in. We try to highlight small press and self-published titles that often get second billing to the glossier monographs and coffee table books. I don’t know the current book count but it’s hundreds. Our audience includes everyone who is interested in the material.  Most frequently we get artists, students, musicians, curators, librarians, weirdos, etc.

BG - How is your store arranged and how would you characterize what you carry?
WY- Our shop is super small, and has four primary categories: art, books, music, clothes. As far as books go the focus is on artist books and art-related books, in the zone of independent publishing or books that support the notion of autonomous culture.

BG- How do you find the books you sell?
I initially found merchandise through friends who were producing good work. Much of it still comes that way, although the network has widened to friends of friends and like-minded colleagues.

BG- Are there other similar projects that inspired you? What was the initial mission you set for yourself, has that mission changed over time?
WY- Other similar projects include historical spaces like Shakespeare and Co. in turn-of-the-century Paris left bank, and lots of independent record and book stores I used to frequent in my adolescent years.  Also relevant, although not a direct inspiration is Printed Matter, NYC, which set a major precedence for organizations that support self-publishing in art.

BG- Is encouraging the production and distribution of books, zines and other democratic multiples, which operate outside the gallery system an inherently political or social act? Do you have a specific political or social stance? If so, what is it?
WY-Yes it is, because it reminds people they have the power to create, distribute, and perpetuate their own cultural values. In an age when art and corporate culture are so closely tied, I find it important to have the option of defining your own culture through your community, rather than having to count on support from larger outside forces.

BG-Do you feel one of your projects is nurturing a culture that creates a market for the work you carry?
WY-Yes, I think so. The whole project of the store is pretty community-based and I hope that it helps to strengthen the community and serve its needs.

BG- Is Ooga Booga locally-centered, or national and international?
WY- It’s really a bit of a mix. There is a definite local and physical presence to the shop despite us being so tiny. But we also work with people from across the country and all over the world, which in a way highlights a common spirit amongst seemingly disparate practices across the board. 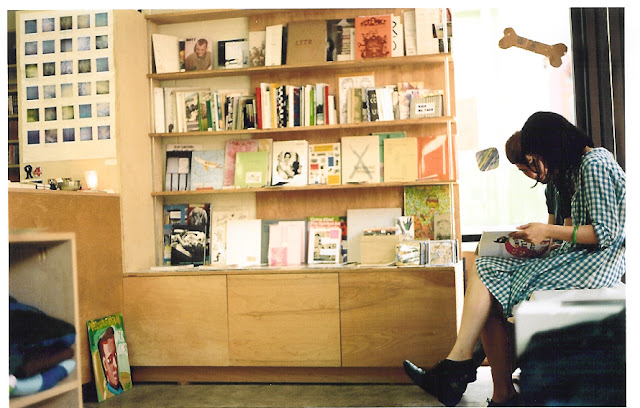