Nietzsche's Typerwriter, the Most Sculptural in Human History

This installment primarily pertains to a specific and truly beautiful object, the Malling-Hansen writing Ball. But first a very brief update on my first novel, my second novel and an artist book project.

1) My first novel, Good For Nothing, is being represented by a lovely agency. They represent a distinctly international stable of novelists and I am tickled to be among them. My agents have been shopping the manuscript among English language publishers for the past three months. I was warned that on average it would take between three to six months to find a publisher. So, daily I try to take deep breaths and be productive.

2) One object of attempted productivity is a new novel with the working title Missing People. I am making slow and erratic progress. Though, I do feel the process is beginning to level out, become more productive and more consistent. I'm at the very early stages of a long process. Fortunately, some days I really enjoy it.

3) Finally, a couple other projects worth mentioning. My review of Tate Shaw's artist book Threshold is now available in JAB 31. Also, the artist book project I am co-producing with artist Karol Shewmaker, entitled ROOM, is well under way and looking promising. The publication date for ROOM is nearly a year away, but that is a good thing. There is much work to be done between now and then. 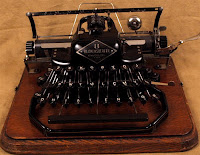 For a few years now I've been interested in early portable typewriters as objects. I am not a collector of many things, I have moved too often in my life to feel comfortable with accumulating cumbersome knick knacks. The one exception is books. I don't mind passing good books on to others who might enjoy them, but I generally hate to get rid a book that has affected me. Despite my current narrow collecting parameters, I might have to make an exception where these gorgeous old typewriters are concerned. 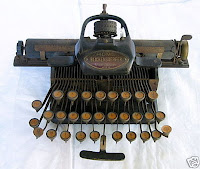 It was while researching, gawking and coveting various typewriters that I stumbled across a ready made steam punk contraption that is so gorgeous I had to share it. 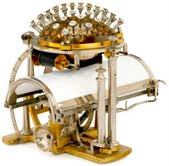 The Hansen Writing Ball (watch it in action) was invented in 1865 in the Danish capital of Copenhagen. It's original purpose was as a communication tool for deaf-mutes. It entered production in 1870 and was the first commercially produced typewriter. Not only that, because of some special features, it is also arguably the first electric typewriter.
The Hansen ball was a combination of unusual design and ergonomic innovations. As you can see it has a unique arrangement of 52 keys on a large brass hemisphere, visually evoking a giant, mechanical pin cushion. The inventor, Rasmus Malling-Hansen reportedly experimented with porcelain models as he perfected the placements of letters on the keys with an emphasis on quickest writing speed and ease of use. He ended up placing the most frequently used letters to be touched under, what he deemed to be the fastest typing fingers. He also placed most of the vowels to the left and consonants to the right. This, together with the short pistons design made the writing speed of the ball very fast.
The first models typed on paper attached to a cylinder, and included an electromagnet, thus making Malling-Hansen's machine the first electric typewriter.

Interestingly, when he began having serious problems with his sight, Friedrich Wilhelm Nietzsche sought to buy a typewriter to enable him to continue his writing. And in 1882 he received his Writing Ball. It was the newest model, portable and tall with a color ribbon. Approximately 60 of his works are known to have been written on this writing ball. 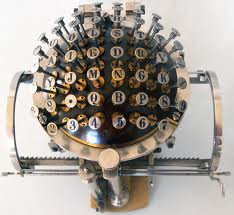 Unfortunately and perhaps predictably, Nietzsche wasn't totally satisfied with his purchase. A number of theories have been advanced to explain why Nietzsche did not make more use of it.  New research indicates Nietzsche was not aware that his trouble in using the machine had been caused by damage to it during transportation to Genoa in Italy, where he lived at the time. And when he turned to a mechanic who had no typewriter repair skills, the man managed to damage the writing ball even more. Personally I believe that had he found the experience completely liberating he would have been forced to moderate his bleak world view and was emotionally unable to leap that shark.

The Writing Ball is a thing just like me: of iron
And yet easy to twist,
especially on journeys.
Patience and tact one must richly possess
And fine little fingers
to use us.

While I maintain a reticence about the accumulation of too many objects, I would not be opposed to receiving a Writing Ball as a gift. (Hint Hint).