This marks the 96th post on this blog. I know it isn't a particularly significant number. I'm aware it makes more sense to wait for the 100th post to make a big to-do. But, I choose to be contrary. 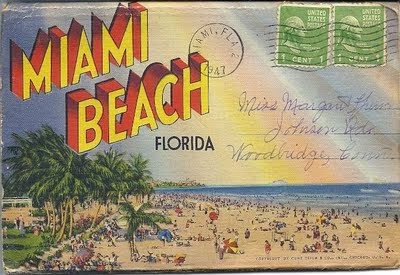 B( l )eached is both a story and the name of a larger colaborative Artist's Book that will be published in 2015. The AB was concieved and organized by Mike Koppa of The Heavy Duty Press. It was inspired by a stack of beachfront postcards purchased on a trip to North Carolina's Outer Banks. Artists were asked to alter the postcards. The resultant mixed media collection inspired the narrative below.

I could trace my childhood by brushing a finger over a map’s dry surface. Starting from a modest ranch, part of off base housing, in Newport News, Virginia. Sliding my finger south I could pass it over six homes along the Atlantic coast in the Carolinas, Georgia and eventually end in a spot south of Miami where the land stops. My family settled there near some of my mom’s family.

My first lungful of air was filled with the scent of the sea. When just big enough to walk, I remember looking down at my cherubic toes in hot sand. Up en pointe I punched holes in the beach. Chubby feet balled to catch the grit and hold it, to grasp the new sensation and not let it loose. The wind blasted grains and mist against me. A wet line of foam surged toward me, sweeping sudden and cold over my feet. Later my cloth diaper, heavy with seawater, came loose, the weight bending the safety pins until they popped and gouged a red, angry line down my thigh. My parents and big sister laughed at my nudity and I was happy.

After college, I rebounded like a kid’s cheap yo-yo, drawn one state at a time back along the coastline until I married and built an academic life outside our nation’s capital. My grandmother Daisy passed away last semester, and as the most responsible living relative, I’m flying down on my sabbatical to tie up a few loose ends, liquidate a few assets and pay some outstanding bills. Plus, my wife and I need the break.

I don’t keep a resume. Hell, now that I’m tenured I barely keep my CV up to date. But I know CV is short for Curriculum Vitae, which is Latin for course of life. And that’s what’s on my mind as I feel the jet engines slow, feel my stomach drop.

Out the window, as we swing in a wide turn around Miami, I see Biscayne Bay. I was here in ’82 when Christo and Jeanne-Claude ringed the islands down there with Pepto-Bismol colored plastic sheeting, like some grotesque halo, or a misguided, gaudy Shinto celebration of nature. Supposedly it killed a lot of pelicans, the plastic. Those massive birds dove in whole flocks to catch fish in their bucket mouths and came up under the pink sheeting to suffocate, their corpses accidental and grisly additions to the exhibition. At least that’s what I heard back then.

My rental car takes me down roads whose names I should know, past sights that used to be commonplace. It’s funny how memory works. The shiny, happy, bright images of a ten-year-old are dulled with layers of failed responsibility and pessimistic attitudes about consumerism and tainted politics. The color leaches out of everything given enough time. Or maybe my eyes are just tired.

In Homestead, where I attended middle-school, I stop at a wide spot next to the road to buy avocados, a mango and three oranges from a Cuban man with boxes of fruit lined-up on a card table. I sit on the hood of my car and pitch strips of orange peel into the tall grass. The sticky, sweet juices run into my whiskers while the sun bakes my forehead. Seagulls cry out overhead and catch the air in their wings as they glide into an adjacent parking lot. From above, the rising waves of heat from the flat surface must have looked like deep, dark water. I watch them squawk in protest, hop around and peck through the gravel for food. Soon they give up and get back to the sky. I take their lead and drive toward the fish camp.

The strip of road that leads to Key Largo has beach on both sides. In the shallows off to the right a flock of flamingos stand on one leg. I’ve been told flamingos have white feathers. Their usual pink coloring comes from the red algae in their diet. This flock bothers me. They are faded and pale. Not the flamboyant, vivid birds I remember.

The last time I saw my grandmother alive was at my grandfather’s funeral, years ago. She’d gotten arthritis bad and her hands were like a knot of white root vegetables. She’d been forced to give on planting the flowers she’d always loved and instead stuffed cheap plastic flamingos into each of the terracotta pots that lined her little porch. When she hugged me, she’d had strength left in her arms, nearly crushed me.

I’m mostly here to clean out an old storage unit where my grandparents kept some things after Andrew did its damage and the insurance company shafted them. Their house had stucco the color of guacamole and big white awnings that folded down like protective metal wings over the louvered windows in a hurricane. The awnings were no help when Andrew stripped half the roof off and filled the house with storm water and palm fronds. The gators ventured from their canals around the citrus groves and swam in the flooded streets. After things dried out my grandfather Jan found a big old granddaddy gator had made a nest between two mangled banana trees in the back corner of the yard. By that time it was clear they were abandoning the house, so he left the backdoor open in case the gator needed anything amid the moldy carpets and swollen floorboards.

The fish camp is at the far end of Key Largo and consists of a series of cinder block cabins facing the sea, a long pier to stand and fish from, a place where the charter boats come to pick up guests, and a narrow stretch of beach, baby dunes, and ragged sea grass. The exterior of the cabins are each a different color. The woman at the office hands me the key and tells me I’m staying in the Honeydew suite. After I unpack, I sit at a picnic table near an abandoned fire pit and eat slices of ripe mango in the dark as the wind comes off the water. I take my cell phone to call my wife, the light is harsh in the night, and bugs immediately start to gather. I slip the phone back in my pocket. I know she doesn’t want to hear from me.

In his retirement my grandfather Jan had loved two things, and neither of them was his wife Daisy. The first was a sky blue T-bird convertible. He always claimed he couldn’t drive it in the spring because over-sized mosquitoes were drawn to its color and would cover it so thick it looked like its hood had been flocked black. But he couldn’t find the heart to sell it, even when his cataracts were too bad to drive. The other love of his life was his Slash2 BMW motorcycle.
After drinking black coffee on the pier as the sun comes up, I find both of his prized possessions in the storage unit just off Truman Avenue near the tip of Key West. It only takes two days to sell the T-bird for more money than I expected. I use the cash to pay Daisy’s remaining bills and to have the BMW tuned-up, and purchase new tires, a new battery, and fresh spark plugs.

That takes a few days. During that time I visit the Hemingway Museum, eat fresh seafood and fresh fruit. I watch old couples dance like kids. I watch kids lay on the beach, not speaking, like old couples. I drink too many girly drinks with ridiculous umbrellas. I end up addle-brained and ashamed, thinking Papa Hemingway would never make me a tragic hero in his next book.

As the sun sets on my fourth night I walk along the beach and people watch. Little children play in the surf tossing a Frisbee into the ocean and watching it wash. An old Japanese couple walks together, shoulders touching and a metal detector skimming the sand in front of them. A bald woman in a see-through dress carries a big bottle of Champagne in one hand and a glass that she keeps refilling in the other. She comes right toward me. As I watch without appearing to watch, she unslings her oversize purse, and like a magic act, a white dog hops out. She leans over drunkenly to let the enchanted canine drink from her glass. She refills it again, holds it high in a toast to me, I smile and we part ways.

That night I build a fire and sort through musty boxes of papers from the storage unit. Old family photos of people I don’t recognize. There are several black and white images of my grandparents as a young couple on a beach, her hair long and light from the sun. There a snapshot of them rolling in the surf like a staged press photo to promote that Pearl Harbor movie, From Here to Eternity. They looked happy, giggling too much to give a serious kiss. I slowly burn everything except one stack of images, a few faded postcards like you'd find on a wire spin-rack, a leather motorcycle jacket in reasonable shape, and a decrepit helmet with goggles attached.

I drive the rental car back to the lot where I got it. I walk into the airport and tell lies about a family emergency to three different people until I’m refunded the majority of my return ticket. I spend nearly a third of the refund on the cab back to the garage where the bike is waiting.

I’m cautious for the first few miles, feeling out the breaks, the heavy boxer engine sticking out either side of the frame like nubby wings. It doesn’t take long before it feels like an old friend. I stop at a roadside stand that sells Cuban coffee and sandwiches. I knock back the coffee, put the sandwich in my saddlebag for later. I text my wife instead of calling. I can’t imagine enough time has passed for her to want to speak to me, the pain of my hurtful confession still too sharp. But I want her to know I’m coming. I’m taking the long way up old coast roads. Taking my time, letting the wind ease the sharp edges and the sun beat on me until the garish colors fade to white.

In other news: my beloved book dealers have included one of my small books in their Around the Kitchen themed catalog for January. You can find it at the link above and follow it to a number of my books and zines, just for fun.

Lastly, Good For Nothing has been out in the world for almost eleven months. In that time, I've managed to complete my second novel, Missing People. It is now with my agents who will be taking it with them to the London Book Fair, to kick off the new season of book industry conferences. Wish us luck.
- January 14, 2015