Unpacking the Good For Nothing option (part 2)

In Missing People I wrote:

He crosses the Chicago River, the bridge swaying and bucking like the deck of a ship as the car traffic and foot traffic beat out competing rhythms in opposite directions. He walks a zigzagging pattern along the sidewalks and across the streets, moving away from the heaviest commuter routes to less traveled areas. The sidewalks in the city’s center have been cleared of snow, but the piles along the curb make the way narrow.

He passes beneath a block-long array of scaffolding built the previous summer to protect pedestrians from construction debris during the stone and glass building’s architectural face-lift. Summer storms and an early, unusually harsh winter curtailed their progress and interrupted their schedule. Now, Townes thinks, the scaffolding is a rusty metal promise, a physical reminder of the intention to complete the renovations.

For the purposes of this conversation it may help to know that Townes is our overly-cerebral protagonist and he is ending his commute into Chicago on foot. His observation fits here. Because a movie option is like that scaffolding, a rusty metal promise, a physical reminder of the intention to make Good For Nothing into a movie.
The option is a temporary placeholder so an interested party can pay a fee to have the right to put together a movie deal over a limited span of time. The contract itself is about sixteen pages in which great care is taken to specify what will theoretically happen [or what will eventually happen if one wants to be optimistic (and why the hell not be optimistic)] when Good For Nothing is made into a film. It sets a floor and a ceiling for compensation. On the first day of filming the Author (me) will be paid a minimum of X and no more than Y. The exact number is based on a percentage of the intended budget for the production. It also discusses every possible iteration of spin-off, sequel, rebroadcast, DVD, streaming, sale of foreign versions of the film, remakes etc...It's bewildering. But, the reason the option contract is long is so all parties know and agree upfront to the conditions of an eventual deal.
The initial term of this option is eighteen months with two paid extensions written into the contract. At this point Michael Walker is acting as screen writer only. He has completed a first draft of the screen play and is working toward finishing the second draft. Then he will begin the process of building interest with actors, producers, and directors until he has put together the right mix of people and the right amount of capital to begin making a movie. Or something like that. There are a lot of steps between now and an eventual production. That about sums it up.

In other news, above you can see the ARCs that arrived. They are the initial copies that are shipped to reviewers and booksellers to begin to build interest in the lead-up to the January 18th publication date. As you can see they are paperback, though the finished books will initially be printed as a hardbound. 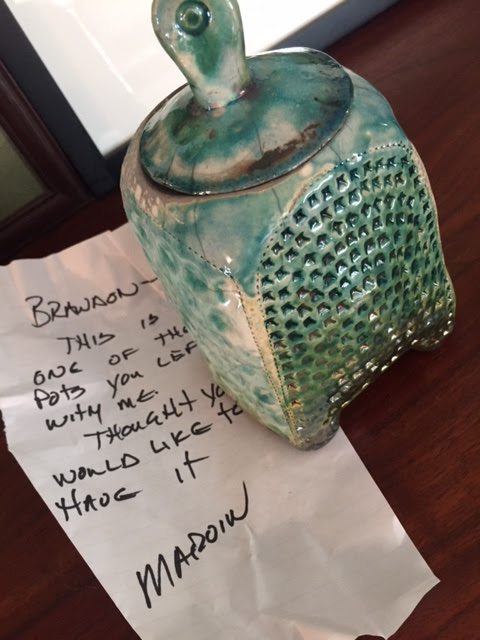 Lookie here. Thirteen years ago I was teaching ceramics to college freshmen and made this little piece as a hand building demo. I bisque fired it and glazed it and took it my friend Marvin Crozier's studio so we could raku fire it. Then I moved. It sat for ages. On Oct 1, 2016 Marvin decided to fire it and shipped it to me. Marvin is a great potter and good man. If you are in the market for ceramics, check him out.

Lastly, I was visiting artist at Columbia College's Center for Book and Paper Arts recently. I spoke to a class of graduate students about thinking from the field of artist's books that shaped my own work, how my work in ABs relates to my publishing efforts, and how narrative writing can be an important aspect of work in the field of ABs that is often not included as part of the pantheon of book arts. I should have taken a picture of the class, but I didn't. Trust me, it looks about how you'd expect.

Next time: Tyrus. Oh - if you are interested in perhaps attending a reading or signing think about following this blog. I will be posting details as they are confirmed.