As previously promised - I will attempt to share the idea of facts (but not actual facts per say) that characterize fake history and current qualities of my North American publisher Tyrus Books as well as its place in a larger network of media activities.

Once upon a time Ben LeRoy wanted to make good things. He founded Bleak House Books. Bleak House (for the geeks out there Bleak House is also the name of a Charles Dickens novel as well as the name Dickens' home in Broadstairs, Kent came to be known as) was recognized for publishing numerous acclaimed works of fiction. Time passed, publishers took notice and Bleak House Books was purchased and folded into a larger publishing house.

Once upon another time Ben LeRoy wanted to publish good books. With money from selling Bleak House, in the summer of 2009 they started Tyrus Books in Madison Wisconsin. Tyrus published titles that received critical acclaim and in 2011 F+W Media expressed an interest in acquiring Tyrus as an imprint for their growing book publishing division. F+W Media has been around for nearly a hundred years. For most of that time they published niche magazines about hobbies, art, crafts, writing, lifestyle etc…Examples: Writer's Digest; Knitscene; Southwest Art; and HOW. Sometime in the 1990’s they expanded to publishing books in the self-help and memoir space. Then in the early 2000s they began building the book publishing division by buying existing regional fiction publishers.Tyrus was meant to be their literary/crime imprint. Initially Ben LeRoy didn’t want to sell a second successful publishing house and he definitely didn’t want to move from Madison. Eventually he and F+W reached an agreement. Ben is publisher of Tyrus, Tyrus is an imprint of F+W media.

For me, this means I have the face-to-face experience of working with a hands-on boutique literary publisher but with the marketing muscle similar to a larger house. It is, in essence, the best of both worlds.

In related news
Here are the press sheets that were produced for the US release of Good For Nothing and Missing People. A press sheet is a one page snapshot of pertinent facts intended for book sellers and reviewers -  and usually accompanies the ARCs (advanced review copies). 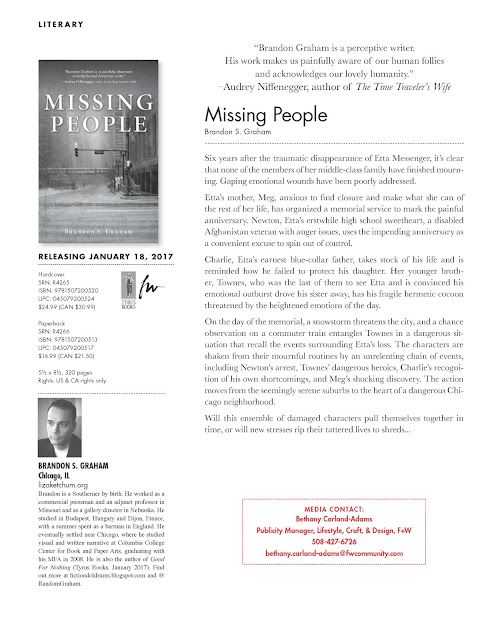 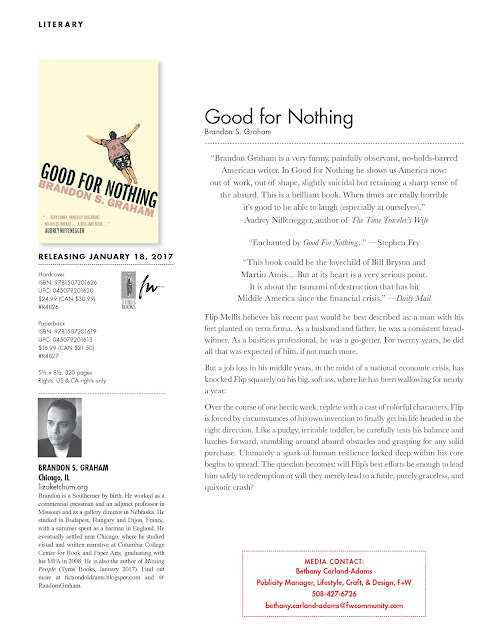 F+W Media uses Ingram distribution services, one of the two big book distributors. Despite the publication date of January 18th marked on the press sheets, Ingram is now listing the pub date as Jan 1, 2017. In theory those people who choose to order in advance could conceivably have a fresh, hardcover edition in their paws by Christmas.

Next time, I think I’ll share a short story.