A birthday gift for everyone

If you've been following along you are aware that Missing People and Good For Nothing were released in North America by Tyrus (an imprint of Simon and Schuster) on January 1, 2017. My local independent book store informed me that on January 3rd, they would be placing hardbound copies of my book at the front of the store in the new arrivals section. As it happens, January 3rd is my birthday. For twenty years, one of my life goals has been to bop into my local book store and see one of my titles on the shelf, to heft it, open it, smell it, feel it, and to know I am a full participant in the writer/reader/bookseller life cycle.

I had a very nomadic childhood, and books (and the places I'd go to buy them) were an important through-line when I moved my young life from state to state. Wandering a bookstore was like being home. Finding a book to sink into was a comfort amid the swirl of new variables that came with each new neighborhood. In my twenties I worked in a used book store. I mostly sold coffee. But I also answered questions, helped find title, made suggestions, and had daily conversations about books. I saw how books touched peoples lives, became like cherished friends, made people's lives better, richer, more meaningful. So walking into Anderson's books in Downers Grove, Illinois on my birthday and finding two hardbound titles that I'd written staring back at me was a significant moment (captured in this short video):

How is this a birthday gift for everyone?

Today I give the gift of not blogging about the play by play of sales of these two title as time moves forward. This post will be the last focused on the roll out. After today, emphasis will be on the writing process for the new book Half Dead. But, so many things have happened in the first three weeks since these titles were released, I will enumerate some of them here.

Missing People
“Both psychologically searing and fast paced, Missing People poignantly shows that when one person goes missing, their loved ones can lose themselves as well.” – Booklist

Good For Nothing
“Graham’s deliciously satirical first novel will charm readers with … plenty of laugh-out-loud moments … Graham gives his leading man a sympathetic edge, using him and his well-drawn supporting cast as vehicles for biting social satire of contemporary American life. A brilliantly entertaining debut.”

The Dirt Worker's Journal Book Blog
Brandon S. Graham’s new novel “Missing People” is the classic punch in the gut Grit-Lit storytelling I’ve grown to love from him over the last few years. He does not disappoint with this nail-biting tale of colorful characters making their way in the world.
To me the book reads much like a movie playing out in front of you on the big screen. This is the telltale sign of a great writer. Someone who has spent day in and day out with each character-pouring everything they have into each one to make their book alive and believable.
“Missing People” is a book I highly recommend. Graham is at the top of his game. My prediction is this book is going to sell many copies and most likely make it to the big screen. It’s that good. So, pick up your copy today!

Columbia College Alumni Spotlight
'In Missing People, Brandon Graham MFA ’08 tells the story of someone who’s not there. His second novel explores the disappearance of Etta Messenger, told through the shared histories of her parents, her high school sweetheart and the other people who made up her life.

Graham has a lot to celebrate in the new year: Missing People came out January 1, at the same time as the US publication of his first novel, Good for Nothing. Both are offered through Tyrus Books, a new imprint of Simon & Schuster. At the same time, Good For Nothing was optioned for a movie.
Over the years, Graham has worked in visual arts, ceramics, writing and more. While pursuing his MFA at the Center for Book and Paper Arts at Columbia College Chicago, he combined written and visual art into short literary zines and longer off-set booklets. He talked to us about how all of these experiences combined in his career as a novelist."

Book Launch Party: My first book signing/event was a few days ago at a local pub. After moving so frequently as a kid, it is significant that I've been in this place for eleven years (a quarter of my life). Books are long projects and staying put helped. Even more helpful was beginning to understand what be a part of a community actually feels like. 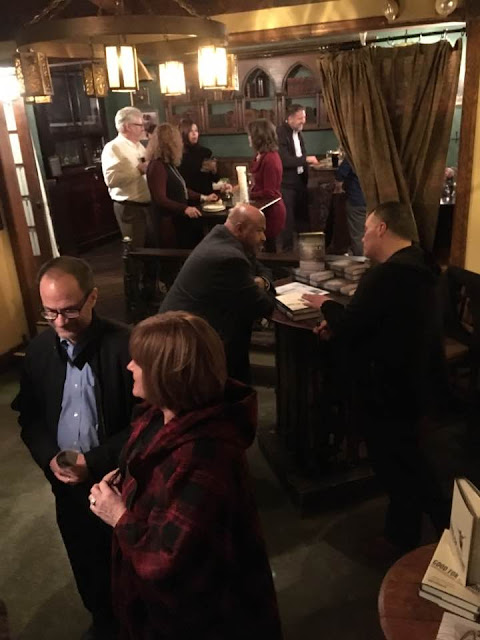 In a week or so I have another signing locally, then two weeks later in Traverse City Michigan followed two weeks later by an event in Chicago. Next post, I will mention very little about those things, and instead focus on the new manuscript (over 100 pages written). Thanks for reading.