On Loss and Weightlessness


A week ago today my father Robert G Graham passed away in Roanoke Virginia in the same hospital where my little sister was born decades ago. At the service I told a story:

In December of 1974, about a month before my fourth birthday, my Mom was stressed that she hadn't managed to drag out any of the the Christmas decorations. My little sister was about six months old and had been sick a lot. My mom was wrung out. She felt it was her job to make the house homey for the holidays and couldn't manage it. To help my dad said he'd take me off her hands and go buy a Christmas tree.

A few months before he'd bought a '65 Econoline truck in red for seven-hundred bucks. It was a cabover design with the 144 cubic inch straight six cylinder engine encased in a metal shroud called a 'doghouse' between two bucket seats. It didn't have power steering or power brakes and had a manual transmission with a column shift - also called 'three on the tree'. My dad liked cars and said he'd get the truck to haul stuff around as needed. But mostly he wanted something to tinker on. So that late-winter afternoon he helped me get my hat and gloves on and pitched me in the passenger seat of that strange little truck. He didn't buckle me because the truck didn't have seat belts. They'd been removed at some point and didn't seem essential.

We drove from our house on Kennedy Street just off of Williamson road out toward Blue Ridge Virgina. It was dusk when we pulled into a gravel lot of a cut-your-own tree farm. We hustled down the rows and he found a tree while there was still enough light to see. He laid on his back in a skiff of snow and reached under the tree with his saw. Pretty soon the tree fell over and he hefted it by man-handling the middle of the trunk in one hand. I grabbed a fistful of branches to feel like I was helping and had to run to keep up with his long stride. He paid, pitched the tree in the bed of the truck and we piled back in.

He edged up to the road and revved the engine. Dad was a Nascar fan, he'd even been on a pit crew for a sponsored stockcar that ran at Daytona when they still raced right on the sand. There wasn't a lot of traffic on the two-lane, but he wanted to have some fun and he liked to drive everything like it was a muscle car. A big delivery van was coming and he shot the little truck out in front of the van, arced us into the far lane. My passenger side door came open. I guess I hadn't closed it right or I grabbed the handle and pulled it open myself. I don't recall that part. What I do remember is slipping off the seat. I was still in a seated position, but I was out in space, nothing  holding my body up. 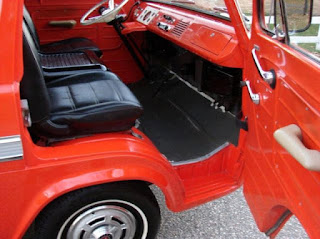 I was in the space where the closed door should be and heading to a ditch along the side of the road. My dad couldn't stop, the van was on our ass. He clutched, continued to steer with his left hand, and snatched me by my wrist with his right as my legs started to drop from under me. He yanked me back in. Shifted into second, popped the clutch so hard my door slammed closed. I was safe again; in the truck with my dad.

The headlights of the van were blinding and Dad quick shifted again and put some distance between us and the near tragedy. He leaned over the big steering wheel and gave a nervous laugh. He said, "You doing okay over there buddy?" I must not have given him a convincing response because he told me, "You're okay. You're fine." We sat like that a few moments. He got serious and said to me, "Now there's no reason we need to tell your mother about this." And I don't think I ever did.

I told a couple other stories about my dad taking action, formative memories from my first seven years or so. Then I shared what an especially cruel disease MS was for a man defined so much by his physicality, what a painful process it was to see the slow-motion devastation of that disease slowly eroding his body until he wasted completely away. In truth, I wasn't strong enough to deal with it too often. After a nomadic professional life as a first-gen computer programmer for hire, a divorce or two, and a progressive illness, he settled back near his brothers and sisters and nieces and nephews and cousins. They did most of the heavy lifting and emotional work of being with him day to day.

It strikes me that hearing he was nearly dead, that he would die within a few days, was like that moment when I came sideways out of that old truck. Lost and falling, nothing to hold me up. But then my wife hugged me. My kids held on too. Some of my Dad's people helped me to coordinate arrangements, or simply encouraged me. As far apart as we've settled in life they still treated me like family. But most unexpectedly my literary agents each sent me kind and thoughtful notes, shared some similar experience of their own. Another writer, Michael Walker and his wife sent a nice note. Friends, artists, writers. . . my community grabbed hold of me and kept me from flying into an emotional ditch.

I kept moving with as much grace as possible, worried if I stopped I'd never get going again. I harbor a secret concern that I don't process emotions quite like the rest of the world, that I feel deep inside but the pathways that lead to the surface are obstructed. Everything stays trapped and spinning out of control slowly chewing up whatever they grind against. And in hindsight I've started to reverse engineer some of the stories I told at the funeral and recognize that sound adult choices were not a big part of my father's parental strategies. Funny to look at my own upbringing through a parent's eyes.

My long standing professional/creative goals include building a network of like-minded souls who somehow innately get me. The death of my father showed me I have that community, it has slowly formed without me realizing. Don't get me wrong, I'm operating without a net now that my dad is gone. I'm a little lost and dizzy, an emotional vertigo is simmering that I expect to linger for some time, maybe from this moment forward. But timing is everything and the importance of a few well intentioned words sent from across the Atlantic at the right moment made a huge difference. The love of distant family and the physical presences of my wife propped me up when I would have fallen over. For everyone who sent a good thought or shared a kind word, I'm thankful.