What do Experimental Fiction, Graphic Design and Artists Books have in common? Well a lot really. But what I'd like to share is a common ancestor, the father of many things I love: 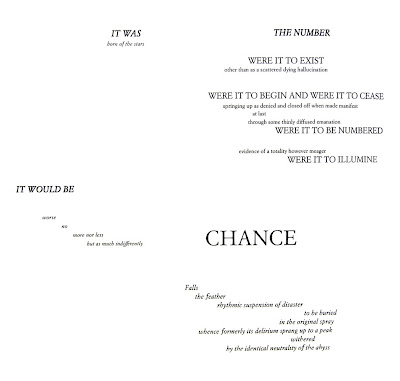 Stéphane Mallarmé was a major French symbolist Poet and critic. Not only did he inspire what would come to be known as concrete poetry but his work anticipated and inspired several revolutionary artistic schools of the early 20th century, such as Dadism, Surrealism, and Futurism. He is also one of the thinkers book artists point to as inspiration.


His later style anticipates many of the fusions between poetry and the other arts that were to blossom in the next century, and in someways characterize postmodernism. Most of this later work explored the relationship between content and form, between the text and the arrangement of words and spaces on the page. This is particularly evident in his last major poem, Un coup de dés jamais n'abolira le hasard ('A roll of the dice will never abolish chance') of 1897. I have supplied one spread of the english version of the poem here. 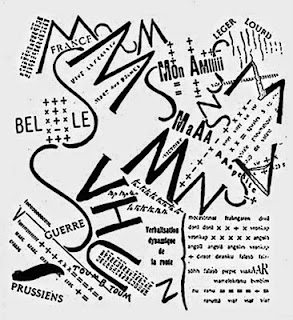 The Futurist Manifesto, written by the Italian poet Filippo Tommaso Marinetti, was published in French as "Manifeste du futurisme" in Le Figaro on 20 February 1909. It launched an art movement, futurism, that rejected the past; celebrated speed, machinery, violence, youth and industry; and sought the modernisation and cultural rejuvenation of Italy.


Marinetti sited Un coup de dés as one of the works that inspired his typographic gymnastics in this very influential booklet. Not only do book artists often refer to The Futurist Manifesto as an example of an artist's book, but it was also the beginning of modern graphic design. 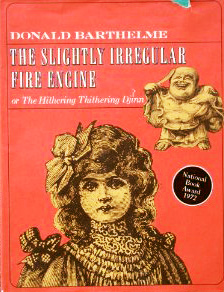 Donald Barthelme was an American author known for his playful, postmodernist style of short fiction.


His collections Forty Stories and Sixty Stories are both packed with very short, paired-down, no-frills fiction; I have come to think of them as the literary equivalent of punk music, only less passionate and more existential. He is the father of what we usually call Flash Fiction these days and is often associated with the spirit of other more experimental literary movements like Oulipo.


Little known fact: Barthelme was given a copy of Un coup de dés as a birthday gift from his father when he was a boy. He later sited it as the thing that inspired him to become a writer. In 1972 Barthelme published a children's book which behaved in all the ways an artist book does.


There you have it. Stéphane Mallarmé is the linchpin between poetry, graphic design, and experimental fiction.
- February 17, 2011