The Father of Mail Art is not a poet

Although Ray Johnson was a seminal Pop Art figure in the 50’s and 60’s and an important early conceptualist known predominately for his work in collage that integrated text and image from a multiplicity of sources, his work is often overlooked.


In the 40's he worked at the Orientalia Bookstore in the Lower East Side where he began to deepen his understanding of Zen philosophy and to employ "chance" in his work. Both of these interests increasingly informed his collages, performances, and mail art. In 1948, Johnson's worked predominately with geometric abstractions. By 1953 he turned to collage. By 1954, Johnson had begun making what he called "moticos;" cut out, pasted, and otherwise altered collages composed of images drawn from popular culture including magazine advertisements, posters, and other photographs. 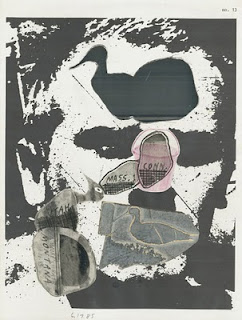 Throughout Johnson's career, text was an integral part of his work; letters or fragments of words and names of celebrities, literary figures, art world denizens, both historical and current. Johnson was fond of saying he didn’t make Pop Art, he made “Chop Art”.
He was one of the first artists to incorporate instructions for active participation in his artwork as he encouraged the recipients to “add to” his work or “please send to…” or “return to Ray Johnson.” In 1962, Johnson founded the "New York Correspondence School," a name invented by Ed Plunkett and used by Johnson for the international network of Mail Art participants he spawned by mailing an enormous amount of material, including fragments of cut-up collages, drawings with instructions, found objects, snake skins and annotated newspaper clippings. Johnson's "mailers" most often included hundreds of mimeographed or xeroxed drawings inscribed with text. On April 1, 1968, the first of the meeting of the New York Correspondence School was held at the Society of Friends Meeting House on Rutherford Place in New York City. 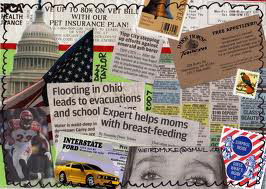 From the early 60’s on and throughout the 70s, 80s and 90s Johnson would reuse surviving "moticos" from the 1950s, cutting them up, creating tiny compositions which he glued onto small blocks made of layered cardboard. He would then ink, paint, and sandpaper these “tesserae” using them in his compositions. 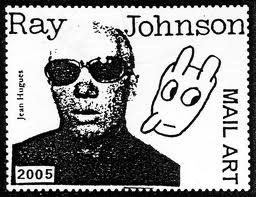 About the being called a poet in the publication of Johnson's book The Paper Snake he remarked:

I'm an artist and a well, I shouldn't call myself a poet but other people have. What I do is classify the words as poetry. Something Else Press published a book in 1965 called the Paper Snake which is all my writings, rubbings, plays, things that I had given to Dick Higgins, editor and publisher, which I mailed to him or brought to him in cardboard boxes or shoved under his door, or left in his sink, or whatever, over a period of years. He saved all these things, designed and published a book, and I simply did what I did without classification. So when the book appeared the book stated, "Ray Johnson is a poet," but I never said, 'this is a poem,' I simply wrote what I wrote and it later became classified.