A Venetian Brocade and other topics

My daughter won a writing award for her school district and was invited to attend the state wide Young Authors conference. It was held at the campus of Illinois State University in Normal. As I sat through the closing ceremony and listened to various Illinois-based children's book authors discuss their individual paths to publishing, one theme that repeated over an over was just how painful the waiting can be. Waiting for readers, waiting to hear from agents, waiting to hear from publishers, waiting to get a publication date. It was reassuring, in a way, to know that this long, slow down-time is actually a normal part of the process.

However, I have been keeping busy. I finished my Weproductions article; it is now making its way through the editorial process with the JAB (the Journal of Artist Books) editorial board. But I expect it will be published in JAB 30 in the Fall of 2011. Just to wet your whistle, here is an excerpt that discusses Helen Douglas's newest Weproductions publication, A Venetian Brocade: 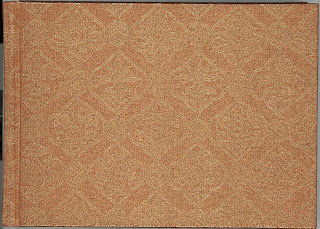 In A Venetian Brocade (2010) Douglas collaborates with another artist, a writer in this case, Marina Warner, to explore the Italian city of Venice. But unlike the collaboration with Irvine, Warner generated her narrative without actually traveling to the site of the exploration.
In this work Douglas’s attempts to address the present and the history of a place; the exploration is not only of the Venice of the present, but a Venice from Douglas’s own past, a Venice with a long and complicated history, and an exploration and conveyance of her sense of the miraculous existence of all these elements at once; dream/reality, past/present, sublime/mundane, imagination/reality, light/dark, commercial/sacred, solid/ephemeral and inside/outside. With the addition of Warner’s narrative, the concepts of East/West and chastity/indulgence are introduced to the mix.
The book is a beautiful material object, 13x18cm, case bound in Ratchford’s Inspiration with foil blocking (an orange-gold brocade fabric with characteristic raised gold design) and flat backed with the title in gold along the spine. The visual narrative is in full color, offset printed with a first edition of 1000. The dimensions create a horizontal spread format.

It has been said that an artist book teaches a viewer how the book should to be read; and A Venetian Brocade is a delightful example of this, starting with what amounts to a visual preface. Upon turning the page the book begins immediately, with the end sheet and end pages initiating the visual narrative. The first spread is an image of an expanse of white and aged stone wall running across the gutter and ending at the right edge of the spread with a corner sculpture of two bearded men in an embrace. The sculpture is stylized and closed, which is to say the sculpture is more like a high relief in the round, with no negative space between the individual figures. Upon closer examination one becomes aware that the sweep of wall has been embellished with a gray-blue motif that looks at once like natural veining of the stone and a variation of the raised gold pattern from the cover’s brocade. Additionally, the expanse of white wall is actually a patchwork of flat, marble cladding, constructed of decorative stone looted from afar and assembled in Italy. This suggests the way images are joined in the brocade of visual narrative to follow.
As the page turns, so to the viewer turns at the wall’s corner to reveal two more figures, in a similar pose, this time, clean-shaven, an indication of their subordinate relationship. Significantly, the first sculpture is of Diecletian, often considered the first ruler of the Late Roman Empire, who famously made Maximina his co-ruler. The initial, embracing pair represents their partnership. Around the corner, the second set of figures represent two more co-rulers, creating an executive board or tetrarchy of shared governance. Perhaps their inclusion on the first few pages is a nod to the creative collaboration at work in the book.
The next few spreads reveal a title page, black text on white paper, an artist statement by Douglas where she describes the book as, among other things, an exploration of the city of Venice in which a sediment of past memory stirs, surfaces and infuses her present-tense experience in city. And finally the written narrative by Warner titled: From the Archives of the Biblioteca Marciana: MS Minuscule 1588.
Warner is a writer of fiction, criticism and history; her works include novels and short stories as well as studies of art, myths, symbols, and fairytales. The story she includes here certainly reads like a fable set in 16th century Rome. It involves four Japanese teens that arrive in Venice in order to testify to the success of a Jesuit mission in Japan. The descriptions of elaborate Samurai regalia and the lavish dress of the church officials echo the textures and colors set forth in Douglas’s visual narrative. About her contribution Warner wrote, “inspired by a true episode, I think this story picks up on the interlacing, exoticism and orientalism of Venetian fabric, in textiles and architecture”.

A fictional correspondence from the youngest of the teens, Pius, is attached. It reveals his concerns over his exposure to paintings, sculptures and frescos that depict an earlier time in Rome’s history when the belief and worship of pagan gods was rampant. These depictions are, according to Pius, commonly set in holy places and reveal salacious and indecent physical escapades. He goes on to confess he has been tempted to have un-chaste thoughts, brought on by a sensually rendered painting of a pagan beauty.
The writing is of literary caliber and is full of rich language, detailed descriptions and hints of social history and church politics. The tone and quality matches the sophistication and nuance of the Douglas’s visual narrative and gives a context to some of the images Douglas utilizes.
With the turning of the page, the visual brocade begins in earnest and the city of Venice unfolds in a colorful, visual narrative. It starts simply but is progressively filled with textural contrast and intricate layers. Venice as seen through Douglas’s eyes, embodies the cities long past and the vibrant present; all adjacent, overlapping and at times concurrent.
The landscape-format spread develops an inner page that floats free, while an embellished pattern brackets and frames the spread’s borders. Bricks dissolve into sky, images shift, water laps and floods. This sinking center is similar to some of the spreads in Wild Wood and here even more apt, as it speaks to the contrast between architecture and canal, hard geometry and undulating organic fluidity. Douglas’s narrative successfully delivers a sense of the art historical blended with the mundane and demonstrates they are part of one comfortable cultural continuum; a model for how day-to-day accumulates into historical time.
While Warner’s writing is evocative and absolutely related thematically, it seems compositionally set apart from the visual portion of the book, leaving the impression that it was something tacked on, rather than developed as a part of the whole. Unlike the corner tetrarch of the first two spread, the written and visual elements of the book stand a little too far apart.
More about the issue of  W  A  I  T  I  N  G:  My last reader, a friend and novelist, sent me an email a few days ago. She was on a ship in the Mediterranean, slowing moving toward Tunisia. She explained she had been unable to pack my manuscript due to wait limits on her baggage, and she couldn't locate the digital file, so could I please re-send the manuscript. Which I did. So that is a very minor kind of progress.
Also, after I was interviewed for the previously posted Bookbinding Now podcast series, I was invited to contribute some interviews. I asked Helen Douglas of Weproductions if she would be willing to discuss her future plans for the press (a companion interview to the JAB article) and she graciously accepted. We are locking down the date for the conversation to take place, but it will be sometime in June.

Joan Lyons, who I greatly admire and consider an important figure in American book arts, recently purchased a set of my books at a fundraising auction for Visual Studies Workshop. I am unreasonably excited and honored by that fortunate circumstance.
And finally, Just Seeds, an artists cooperative which uses art to advocate for social change, is going to be working in conjunction with Booklyn on a nationwide anti-war event. I have been asked to get involved. It is exciting to me because I really respect the work of Just Seeds, and am a fan of Booklyn too.
- June 04, 2011

Hello hello. What follows is an article from JAB 46. It is the last article I will ever contribute to the journal as the double issue... 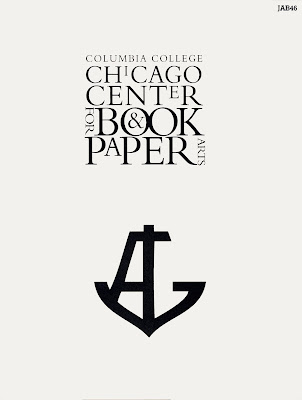