Personal update: recently my literary agents began submitting my novel to a number of editors, publishers and a few book scouts in the English speaking publishing capitals of the world. Also, I have work heading to Seoul for a book arts exhibition and my book The Least Painful Compromise is on display in the Collections section of Tokyo Museum of Contemporary Experimental Narrative's (MoCEN) english language page. The work is currently on view in the Kawada Library and, as I understand it, will become part of a focused gallery exhibit in May of 2012.

Now, Please let me introduce one of my favorite places.
Sticky Institute originally opened under the combined management of Richard Holt, Andrew Seward, Simone Ewenson and Luke Sinclair in April 2001 as an informal extension of Platform Artist’s Group. It is now a stand-alone, non-profit retail environment housed in Degraves Street Subway station under Flinders Street in Melbourne Australia. It sells and distributes zines- “cheaply made independent publications from Australia’s ‘underground’ print culture” as well as provides open resources to its members for the production of zines. According to Eloise, “The square footage of Sticky is comparable to a shoebox, but we are strictly about the zines.” The space is divided between a table, typewriters, long armed staplers, a paper guillotine and a photocopier. The rest is devoted to display. This focus on zines makes Sticky unique among similar outlets. Besides representing and selling zines, Sticky also offers talks and workshops that encourage a DIY ethic.

BG- Outlets like yours are a place where Commerce and Art run together. This combination often presents challenges. Has running a retail art space under economic pressures caused you to reconsider your business model?
EP- Sticky does not operate from a commercial model, philosophically or physically. It doesn't work with what we do. Instead, as a non-profit organization (Sticky is an incorporated association) we are dependent on government grants for the arts. These operational grants, which in Australia are not stigmatized, are designed to encourage the creation and presentation of innovative and critical work of both emerging and professional artists without government intervention. Structured in this way, Sticky is largely protected from economic pressures while being artistically free to ardently defend zine culture.
BG- When exactly did you open your doors?
EP- Sticky evolved stealthily under Platform Artist Space, who curate the old glass advertising cabinets in the subway. Platform operated an administrative office out of a retail shop allocated to them by the City of Melbourne. Its coordinators saw the potential to utilize the space for more than paperwork. In April 2001, Sticky began as a three-day-a-week shop-front with ten publications for sale in the offices of Platform. Originally Simone Ewenson saw the potential to create an in-house artist bookshop, inspired by one in Amsterdam. But over time and with the subversive influence of zinemaker and Platform coordinator Luke Sinclair, Sticky became a designated zine space. Several years ago Platform relocated offices and Sticky became it’s own entity. Ewenson procured an Arts Vic grant to custom-fit the shop and Sticky’s reputation as a dedicated zine outlet was cemented. In 2007 Sticky became an incorporated association and in 2009 our mail order department was established.
BG- How do find the books you sell?
EP- Originally Sticky largely solicited known zinemaker. But as the space evolved, it became known among the national and international zine community. Now, Australian zinemakers know to come to Sticky with their work. We still solicit new work and chase after interesting titles through friends or online connections, but the entire structure is based entirely on zine community networks.
BG- I’m interested in he ways many outlets build community and educate an audience; then curate based on the interests of those who are active participants. I would go so far as to say it is one of the defining attributes of stores who participate in a DIY aesthetic. Do you feel one of your projects is nurturing a culture that, in turn, creates a market for the work you carry? 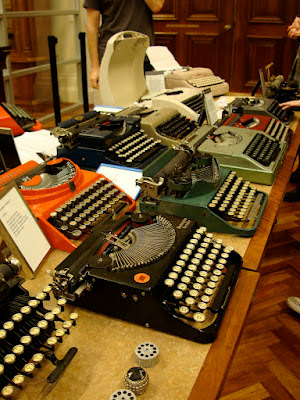 EP- The zine market already existed, but Sticky's increased presence in the zine community has meant increased exposure to people who would not otherwise stumble across zines. Sticky has by no means invented a market, but we have certainly contributed to a kind of localized expansion.
BG- Like other outlets for democratic art, the Sticky Institute states as one of its objectives an intention to bypass the conventional gallery system. Its location is situated in, not only a public space, but in a public transportation environment. This is a particularly apt realization of your stated intentions. Can you talk about the exposure SI receives?
EP- Zines are a unique medium that finds its audience after the fact, which is very much how Sticky operates. We don’t have a set target audience; our prime objective is to serve zinemakers by showcasing zines and promoting them appropriately. People who are in search of zines come to us. Alternatively, some commuters find us through chance or accident. That includes pretty much anyone. But we do have a special relationship with secondary and Uni students and others who need to get their hands on a long armed stapler.
BG- What type of commuter is likely to pass by the Sticky Institute? I imagine people buying zines for their train rides to and from work. Can you characterize the neighborhood around the station?
EP- People like you and me. And people who are not. Melbourne is a pretty metropolitan city. Other shops in our arcade (which is pretty daggy and dingy) include ‘A Touch of Paris’ Barber Shop, a tiny coffee kiosk, vintage and designer clothes shops, Steve and his newsagency, Wax Records and their skate kids fraternity, and a designer’s shop. Above us on the street is a dense café strip. Within the CBD we’re located in an artistic / independent fashion / coffee culture area with lots of stencil art and paste-ups.
BG- How is your store arranged? 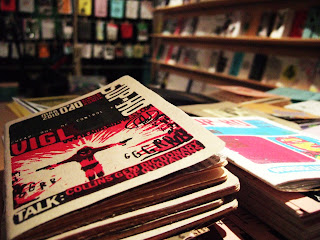 EP- Zines are not placed in any special order in the store. We do carry bound zine anthologies and some zines that later evolve into book editions, but this is limited. Also we find it works best not to categorize the zines we have into sections.
BG- Do you think encouraging the production and distribution of zines is an inherently political or social act? Does the Sticky institute have a specific political or social stance? If so, what is it?
EP- We’re ardent defenders of zine culture, which means we believe in the DIY ethic, democratic ideals, and we endorse works that challenge popular preconceptions and the status quo. We like to be artistically and intellectually challenged at the institute. Ultimately we believe in honesty. The most powerful work are those that are genuine.
BG- The Sticky Institute supports creative expression that explores and challenges popular perceptions. This kind of work can be controversial. First can you give some details about SI’s curatorial prerogatives? And is there an artist, a zine, or a subject that has been particularly controversial for SI. How did the controversy manifest? What was the outcome?
EP- As an art space, the challenging material we showcase is accepted by our community. We assess potentially offensive work according to the context of its’ presentation and the intention of the artist, and use a review panel of board members and volunteers. It’s rare that we decide not to stock something, but I can cite a zine issued by the Icarus Project, that some of us found personally disconcerting. It encouraged people with mental health issues to reduce their dependency on prescribed medications. While the zine advocated an alternative viewpoint, we felt it would be irresponsible of us to distribute the zine.
BG- Through your Zineopedia project the Sticky Institute is assembling a cultural compendium of Melbourne and Australian zine culture. Are their specific artists whose work has shaped the Sticky Institute? And how much cultural influence do you feel SI wields?
EP- While Sticky is a space curated by zinemakers, the institute is not determined or shaped by specific artists or styles – zine culture is very diverse and ephemeral and what we stock is dictated by what’s being made. We’re curated in the sense that the material we accept must be zines and not professional publications. 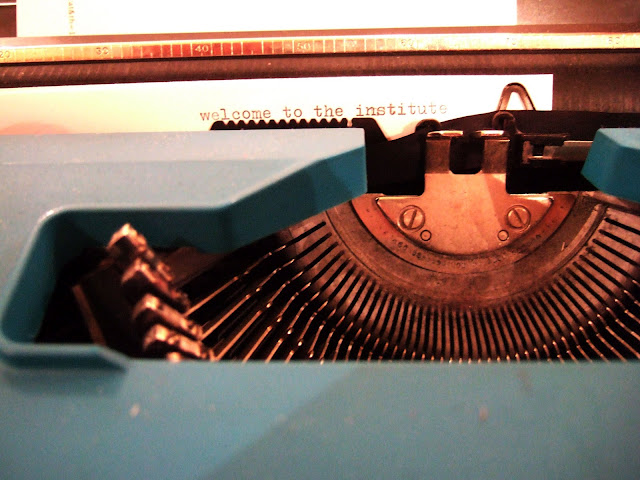