The End of Life as We Know It (and other good news). 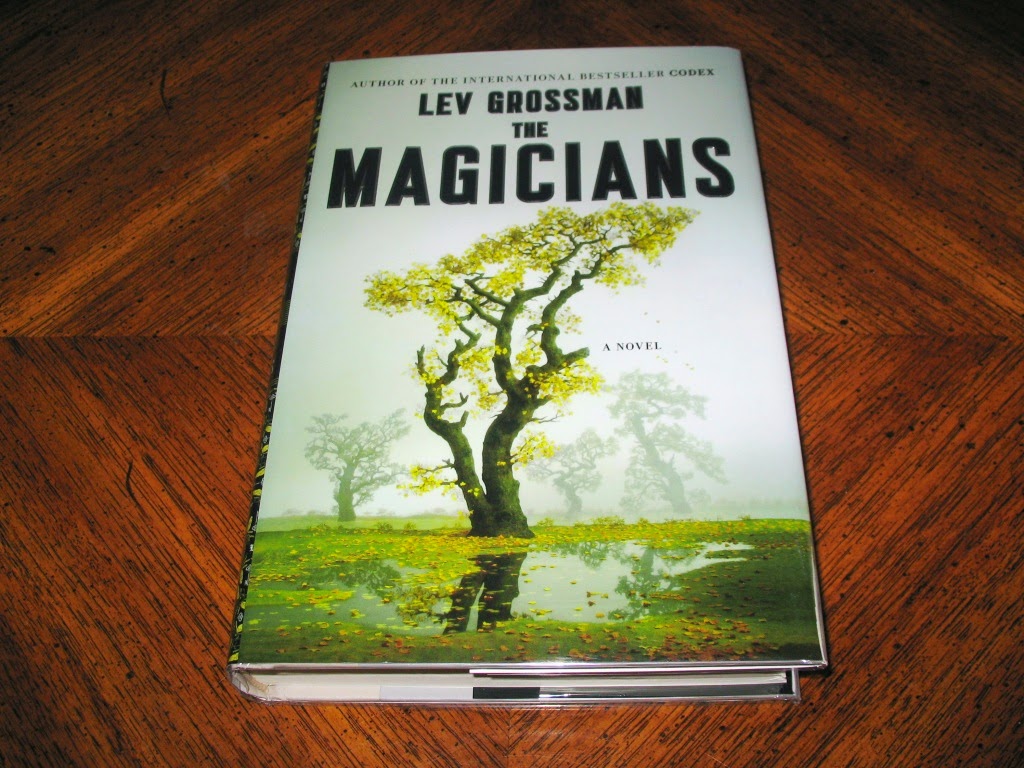 Recently I listened to an interview with Lev Grossman, book critic and author of The Magicians. He was asked if, in light of the success of the Lord of the Rings movie trilogy and HBO's Game of Thrones, he felt fortunate to be a part of a return to popularity of the fantasy genre. He said yes, acknowledged a renewed interest, and went on to explain he thought fantasy offered the kinds of solutions people/readers/viewers are hungry for these days.
His comments made me ask what is the current, most popular narrative trend, and why? This is what I came up with:

Narratives that borrow troupes from dystopian and post-apocalyptic fiction have become national and international obsessions. The zombie-themed comic and graphic novel The Walking Dead, and the novels and television show that have risen from it are hugely popular. I know many people that are obsessed with it. I personally am anxiously awaiting the release of the next graphic novel. Creator Robert Kirkman has said his interest in Zombie fiction isn't in gore and brain-hungry hordes. Instead it is in the ways that people interact in extreme circumstances.

NBC's Revolution describes a world in which the electrical grid suddenly and (seemingly) permanently stops working. It follows a band of survivors trying to navigate the challenges of the new world. There is a slight steam punk quality, in the ways that antiquated technologies become important again. Steam engines are used to transport goods; Horses are a primary form of transportation, bows and arrows, tents, hunting for food become highly valued skills. The potter is suddenly more relavent than the politician.

Falling Skies, similarly, is about a band of Americans trying to rebel against alien overlords while fighting amongst themselves about how best to live in the new reality and potentially rebuild a new country and government on the wreckage of the last. The central arc follows one family, a father and his three sons.

There are numerous other examples: World War Z, The Hunger Games, and a final example of the genre is the BBC's Survivors. In this brave new world, a virus has killed the vast majority of the world's population; society breaks down, anarchy rules. Except where small tribes of like-minded individuals can come together to form communal groups. Of course, when multiple groups are in competition, as resources become more limited, conflicts arise. 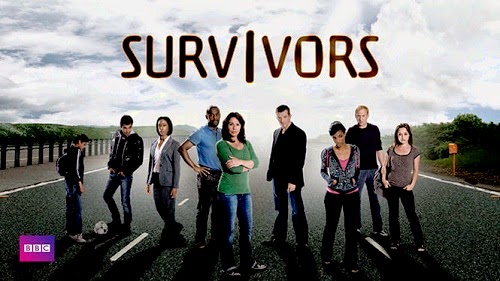 As Kirkman rightly indicated, the specifics of these extreme situations are not important. They are all shades of the same story. What interests me is the WHY of it. Of course, these stories have action, danger, violence, love, sex and periodic levity; all the good stuff of narrative. But the central driver of this phenomenon is that humans have come to feel, in our core, that it is time for radical change. Our organizations, our societies and governments have made poor choices for our planet. The divide between the haves and have-nots continues to increase. Our institutions have not been good stewards for the world's citizens, but have instead had the interests of those who wield the greatest influence in mind.
There is an idealistic impulse in our attraction to the premise of something beyond our control flipping the table over and forcing us to start from scratch. It is appealing to think about circumstances making our lives less complex, more people-centered, less about technology and token economics. All of these shows are essentially existential in concept. They ask who are we, what is important to us, how can we encourage our best qualities while fighting our darkest impulses. What do we do to make the most of the limited time we have?
Today, the results of Scotland's vote for independence was tallied and announced. Scotland will remain a part of the UK. I read an article that argued the well-to-do and long established conservative and upper-class government in London believes it knows best what Scotland needs, and doesn't want to hear from the Scots on the issue. The article framed the political situation as an example of the way technology has made power more diffused. It predicts that individuals will form large groups that will try to wrestle power away from the centralized governments of the world, unless those governments begin to willingly share power and become better at caring for the many rather than the few.
Our interest in fantasy, post-apocalyptical, dystopian, and lord-of-the-flies simplified microcosms may not be so much about escapism and fancy. It may be an expression of our deep desire to live more simply, to start over, to try again. In short, we feel it could all slide sideways and crash to the floor. And we wonder if we could build something better for ourselves if given a chance.

Moving on to writing news: My UK publisher put together this one-sheet for marketing purposes. It was humbling and overwhelming to see all the best comments about my novel consolidated onto one page. Book sales of Good For Nothing have been respectable. It continues to sell and have good reader response. I'm especially encouraged that my publisher continues to support it and spread the word. 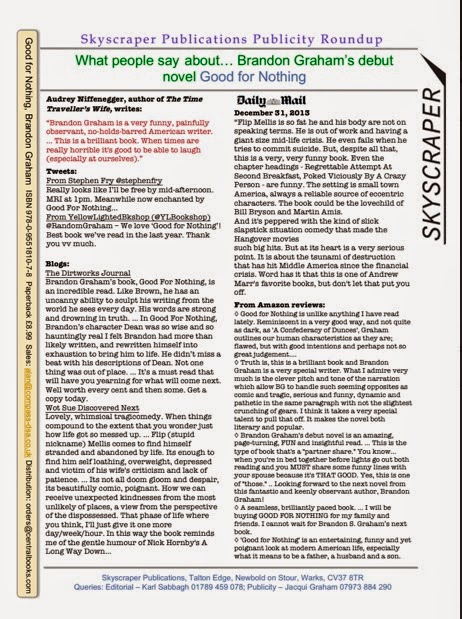 My agency has a new agent on board who will be handling a lot of the english language manuscripts for Pontas. I am looking forward to meeting her and discussion both GFN and Missing People. I am wrapping-up last edits on Missing People now.

I have also been asked to participate in a very interesting artist's book project. That makes me very happy. I'll try to share more specific news on the book front soon. Cheers.